About eight months ago, I got a 1.5″ Rigid Cobra Duty Belt from Original SOE Gear, and I posted a first-impressions review of the belt.  Everything I said in that review still holds true, so I won’t repeat what I wrote in that post.  Instead, I’ll focus on two aspects of the belt that have become apparent in the eight months of use.

I’ve worn the belt almost every day, and it’s been threaded through belt loops and holster loops and mag pouch loops hundreds of times.  This use illustrated the stiffness of the belt and what hard kydex belt loops will do to the inner loop velcro.   First, the stiffness of the belt is what I love most about the belt and what I hate most about the belt.  Once the belt is on, it’s stiff enough to comfortably support any EDC load.  Seriously–if you could find someone to make custom kydex for a M1 Garand, you could wear it on your hip and not care.  It conforms to my waist very well, and it has never created pressure points or pinch spots.  However, it is sometimes too stiff.  (That’s what she said.)  It can be a little bit of a chore weaving the belt through pants loops and holster loops, especially if the holster loops are tight and rigid.  While I wasn’t sweating and cursing after putting the belt on, it wasn’t the easiest thing to do.  I’m the kinda guy that wears my jeans for a few days in a row, though, so it wasn’t a daily feat of nylon, denim, and kydex origami.

All of this threading through belt loops also took its toll on the inner loop-velcro lining of the belt.  The velcro was stitched to the belt just a bit in from its edge, leaving it open to polymer pillaging.  It started to unravel worse than a sweater in a Weezer song.  Every few weeks, I have to cut loose threads from the belt.  The loop is still securely stitched to the belt, so it really seems to be more of a cosmetic issue.  Eventually, there won’t be any loose end left, so the problem will solve itself. 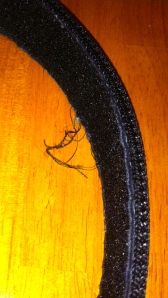 I’ve also started to wear the belt as an outer low-profile duty belt and competition belt.  You can see pics of the belt in action from the photos of my first shooting match.  I bought a cheap Bianchi inner belt covered in hook velcro off eBay, which I mate with the SOE belt.   While the Bianchi belt is pretty flimsy, it creates a very solid system once the SOE belt is in place.  I can leave items mounted to the SOE belt and easily don or doff my gear.  Plus, I can wear the belt with my suit, since the Bianchi belt will fit my dress pants’ belt loops.  Under a suit jacket, the SOE belt looks pretty classy, I think.  And not many will suspect that I’ve got a full load-out of gear under my jacket.

For a belt that was about $70 after shipping and got to me in less than 3 weeks, the SOE belt is an excellent choice for a Cobra belt.  It’s comfortable and more than capable of carrying the heaviest EDC load without flopping or sagging.  And aside from fraying velcro, the belt has held up well to daily wear.

Stay tuned for a first-impressions review of the ring-buckle Gun Belt by Talon Tactical–at only $40.50 shipped, it might be the thrifty alternative for those wanting a gun belt, minus the Cobra buckle.